Like Loading...
The Gaza Strip is suffering chronic shortages in medical supplies according to its ministry of health
Saleh Naami in Gaza, Tuesday 18 Jan 2011

Gaza’s ministry of health warned that continuing shortages in medical supplies could bring surgical operations at hospitals in the Strip to a standstill.

Mounir Al-Borsh, the ministry’s chief of pharmaceuticals, said there were chronic shortages in medical supplies and medical essentials in the operating rooms.

He indicated that some 183 medicines and 165 types of medical supplies were out of stock in the ministry’s storage and hospitals.

This worsens every day, he added.

Al-Borsh held the Ramallah government responsible for involving medical supplies in the political wrangling between Gaza and the West Bank by using the sick as pawns and punishing Gaza’s Palestinian population as a whole.

In his statement, Al-Borsh said that the international Red Cross managed to transport into Gaza enough dialysis solution to last a month.

He called on the government in Ramallah to supply the Gaza Strip with the medicine necessary pointing out that a share of medicine provided by the World Bank must be given to Gaza.

The WB’s supply is to all Palestinians including Gaza’s population, he emphasised.

Al-Borsh called on international organisations to intervene quickly and pressure Ramallah’s health ministry to end the shortage which has created disastrous conditions for thousands of sick Gazans.

Doctors in Gaza have commemorated their colleagues who were killed by Israel during “Operation Cast Lead” two years ago. The group staged a protest to mark the anniversary of the Gaza War and the abuses perpetrated by Israel against ambulance crews and medical staff during its assault and invasion in 2008/9. Ambulance crews marched in solidarity with the doctors. Sixteen medical personnel were killed whilst on duty during the Israeli assault; thirty-three health centres were destroyed.

The General Manager of the Al-Shifa Hospital, Medhat Abbas, took the opportunity to warn of the continuing dangers posed by the toxic substances in the weapons used by Israel during the war. Analysis of biological samples have proved that the Israelis used more than 30 toxic metals during the attack on Gaza, and that uranium and phosphorus bombs were used against civilians; this is banned by international law. Israel also used gas bombs, the research claims, which have contributed to human embryos being deformed.

Mr Abbas appealed to medical delegations visiting Gaza to report back to health organisations and international humanitarian organisations on the situation so that the health status and the acute shortage of medical supplies and devices and medicines in the Gaza Strip can be relieved. He also called on the Palestinian Authority in Ramallah to supply Gaza with its fair share of life-saving drugs on an on-going basis. 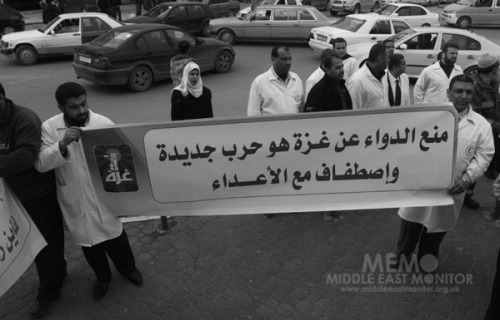 US medical delegation to land in Gaza on Sunday.

Asia to Gaza Solidarity Caravan activists
Egypt has opened its border with Gaza to humanitarian aid and relief, allowing medical supplies from Iran to be delivered to the besieged enclave through the Rafah border crossing.

The Iranian medical supplies are part of an Asian aid convoy, dubbed Asia to Gaza Solidarity Caravan, or Asia 1, which is carrying an estimated one million dollars worth of medicine, foodstuffs and toys as well as four buses and 10 power generators for hospitals.

Earlier this week, Egyptian authorities had denied entrance to a number of Iranian activists and refused to allow 10 generators donated by the Islamic Republic to pass through the Rafah border crossing.

The relief supplies have been unloaded from a ship organized by the convoy, which has docked at the Egyptian port of El Arish.

The convoy had travelled 7,000 kilometers, but was stuck in Latikia, in the northwest of Syria, for more than a week awaiting Egypt’s permission.

It started its journey in the Indian capital, New Delhi. It had passed through Iran, Turkey, Lebanon and Syria to reach Egypt and finally the Gaza Strip.

The convoy was scheduled to reach Gaza by December 27, the second anniversary of Israel’s 22-day war on the impoverished enclave that started on December 28, 2008.

Tel Aviv has been enforcing an all-out land, aerial and naval blockade on the 1.5 million Palestinians in the enclave since mid-June 2007.

The illegal Israeli-imposed blockade has created dire humanitarian and economic situation in the enclave as the United Nations expresses concern that over 80 percent of people of Gaza depend on relief supplies for their survival.

On May 31, Israel’s military killed nine Turkish activists aboard the Freedom Flotilla, an Ankara-backed humanitarian convoy, which was carrying humanitarian supplies to the Palestinians.

On the second anniversary of Israel’s offensive on the Gaza Strip (27 December 2008–18 January 2009), Addameer reiterates its unequivocal condemnation of the Israeli policy that has denied residents from Gaza detained in Israeli prisons family visits for over three years.
In June 2007, as part of its policy of treating the Gaza Strip as an enemy entity following the 2006 Palestinian legislative elections, Israel implemented a total prohibition on family visits to prisoners from Gaza. In addition, starting in November 2009, Israel has effectively prevented these prisoners from receiving money from their families to buy basic necessities by requiring that transfers of money be conditional on the physical presence of a family member at an Israeli bank—an impossibility for families residing in the Gaza Strip.
As a result, the 686 Palestinians from Gaza currently detained in Israeli prisons are completely isolated from the outside world. They are largely unaware of the major events taking place in the lives of their families, including the deaths of close relatives. Similarly, their relatives are kept in the dark about their general detention and health conditions. These prisoners’ access to basic necessities is also severely limited since such supplies are usually brought by family members during visits or purchased by prisoners from the prison canteen with funds transferred from their families.
Israel’s policy has been condemned, among others, by Palestinian and Israeli human rights organizations, the International Committee of the Red Cross (ICRC), and the UN Fact-Finding Mission on the Gaza Conflict in its report on the 2008–2009 Israeli offensive. On 9 December 2009, however, the Israeli High Court of Justice ruled against two petitions filed by Palestinian and Israeli human rights organizations in 2008 protesting the legality of the ban on family visits.

The court held that the right to family visits in prison is not within the “framework of the basic humanitarian needs of the residents of the Strip, which Israel is obligated to enable”.
Addameer continues to contend that this ruling contravenes international law protecting detainees’ rights. The right to family visits is an entrenched right in international law, expressly provided for in the Standard Minimum Rules for the Treatment of Prisoners, the Body of Principles for the Protection of All Persons under Any Form of Detention or Imprisonment, the European Prison Rules, the Fourth Geneva Convention, and, in relation to child detainees, the Convention on the Rights of the Child. Article 27 of the Fourth Geneva Convention obliges an Occupying Power to protect, inter alia, family rights. Under the International Covenant on Civil and Political Rights, to which Israel is a party, the family is recognized as “the natural and fundamental group unit of society” and should be accorded the widest protection possible.
Moreover, Addameer submits that the absolute prohibition on family visits is designed to demoralize and punish prisoners’ families, and by extension the general population in Gaza, for their political choices in 2006, making the policy a clear case of collective punishment, a war crime for which Israel should be held responsible.
Israel, and particularly the Israeli Prison Service, should immediately allow family visits and phone communication to Gazan prisoners in accordance with its legal obligations. Addameer rejects any alternative solution to the complete reinstatement of family visits, such as allowing prisoners to make teleconference calls with their families, as proposed by Israel to the ICRC.
Addameer therefore calls on the members of the international community, particularly UN Member States and relevant UN bodies and agencies to: